The jackfruit is a highly nutritious fruit that everyone enjoys. Find out more about this fruit as we answer the question: Can I give my Baby Jackfruit?

You shouldn’t judge a book by it’s cover, or a fruit by it’s skin! This couldn’t be more true than when talking about the jackfruit – even though it’s rough and hard on the outside, the inside is filled with sweet and juicy flesh. We can all remember many fun times spent with family, sitting and feasting on the juicy pods of the ripe jackfruit.

The jackfruit is believed to have originated in India, about 3000 to 6000 years ago. The name “jackfruit,” is said to have emerged from Portuguese people who called it, “jaca,” which was derived from a name used in southern India, “chakka pazham.” Jack fruit is mentioned in Vedas as one of the God’s favorite fruits. It is one among the three fruits popularly called as Mukkani in Tamil Nadu, along with mango and banana.

Jackfruit belongs to a tree species of the mulberry family and is considered the largest tree-borne fruit in the world. These tropical fruits are generally harvested during the summer season. Major Jackfruit producing states in India are Tamil Nadu, Kerala, West Bengal, Bihar, Utter Pradesh, Odisha and Assam.  Soft flesh (koozha) and firm flesh (varikka ) are the two major varieties of jackfruit found in India. 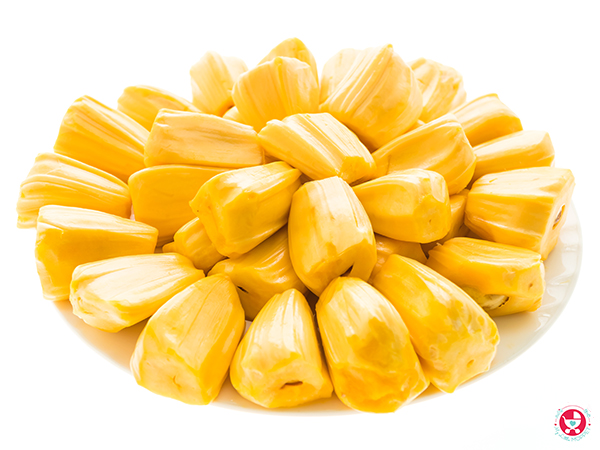 This delicious fruit looks green in color when not ripe, the green pods which are unripe can be made into delicious dishes. The seeds are often dried and preserved to be later used in cooking curries. As the fruit ripens, it turns light brown and spreads a strong sweet fragrance. The orange-yellow, sweet, sticky texture of the ripe pods are perfect to be eaten as it is or made as desserts and smoothies.  The ash of the jackfruit tree’s bark and leaves are believed to help with curing wounds and skin diseases, when applied with coconut oil.

Jackfruit is not just incredibly tasty, it has a number of nutrients which has jaw dropping health benefits. This fruit is high in carbohydrates, Vitamin A and C. It also has potassium, iron, thiamin, riboflavin, niacin, magnesium and many other nutrients. The pulp of jackfruit is composed of almost 74% of water, which makes it the best for hydrating the body.

Can I give my Baby Jackfruit? 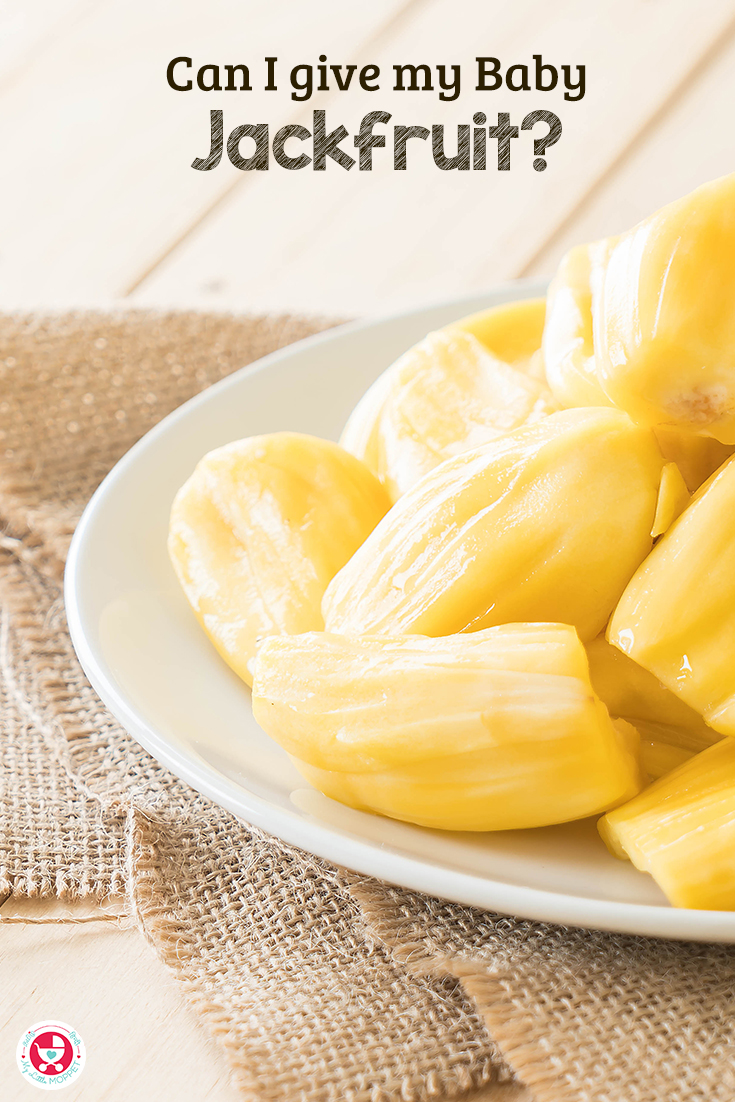 Note: The WHO recommends exclusive breastfeeding till 6 months of age. After 6 months, solid foods can be gradually introduced.

Though jackfruit is a highly nutritious fruit, it’s not advised to be introduced early. The recommended age to introduce jackfruit is between 1 to 1.5 years. The flesh has to be removed and pureed for toddlers or it can be cut into very small pieces and given as finger foods. Beware of choking hazards.

Jackfruit can cause some side effects and allergic reactions to babies, particularly in babies with pollen allergies or latex allergies. Jackfruit is also not recommended for babies who suffer from blood related disorders, as it might increase coagulation. Babies with food sensitivities or a family history of allergies may have an allergic reaction.  In that case, introduce watermelons after consulting with the child’s pediatrician.

While not mandatory, it’s better to follow the 3-day rule to be on the safe side, and start with a small quantity in the beginning. If the baby displays symptoms like itchy rashes, abdominal pain, burning sensation in the mouth, swelling of the face or shortness of breath, he needs to be rushed to the doctor right away.

Over consumption of the fruit has also to be avoided as it might result in diarrhea or an upset stomach. It might also cause carotenemia (a harmless yellowing of soles and palms).

Tips to Select and Store Jackfruit

Jack fruits are found in different varieties such as fruit bars, canned fruits in a sugary syrup, ice cream, jam, chips, juice, pickles etc. But the best option is to consume it as a fruit itself.  There are few things which has to be kept in mind before selecting the jack fruits. They are,

The green rind surrounding the fleshy inside has to be cut and pulled out as equal halves, so that the fleshy part can be taken out. The pods have to be plucked out or sliced out of the white fibrous part inside the jackfruit. This can be extremely sticky, so it is recommended to apply coconut oil on the hands before cutting it. The cut fruit can be stored in the refrigerator for up to five to six days. The pieces can also be wrapped up and kept in the freezer for up to one month. 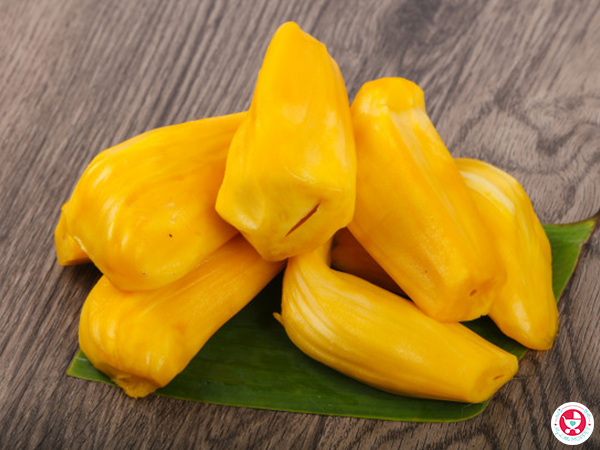 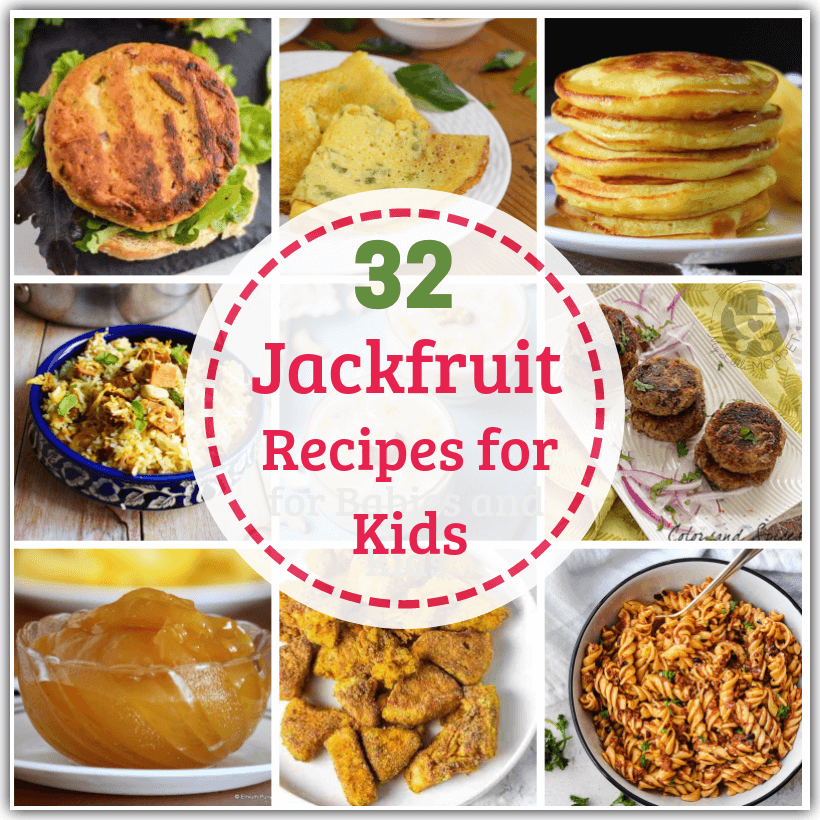 The unique meaty texture of the jack fruit when cooked, makes it the best swap for certain meat-based recipes. This pulpy fruit can be had as a sweet or savory dish. Here is the list of delicious jack fruit recipes for you:

You can check out more healthy jackfruit recipes for kids here. 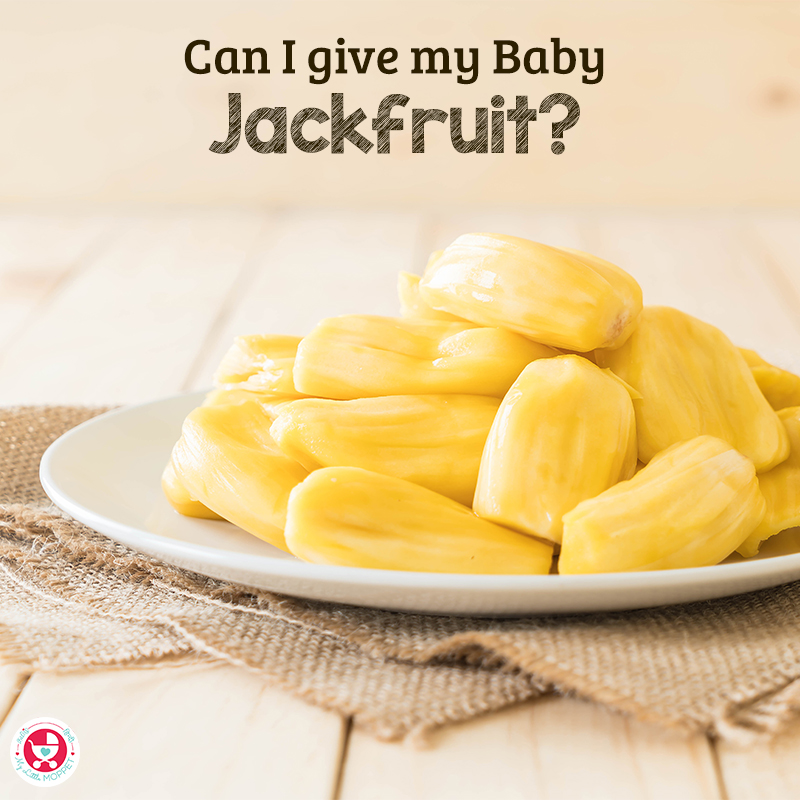