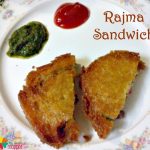 Rajma or Red Kidney beans are known for their great taste and nutritional benefits. However my son hates Rajma and he carefully removes all the rajma from the Rajma masala and just slurps the curry. Little does he know that I add blended boiled rajma to the Masala 😉 But when I made this Rajma…Read More