What is Holi? Here are 15 Interesting Facts About the Spring Festival of Colors that is popular among people across the globe!

Jump To hide
What is Holi?
The Story of Holika and Prahlad
The Story of Radha and Krishna
The Story of Shiva and Parvati
15 Interesting Facts About the Festival of Colors
Buy Healthy Nutritious Baby, Toddler food made by our own Doctor Mom !

Some festivals are celebrated more enthusiastically than others, but few are observed as grandly as Holi, the Indian festival of colors! While Holi is originally a Hindu festival with roots in Hindu mythology, the very nature of the festival has made it appealing to people around the world, including countries in Europe, North America and South America. Since this is the month of this amazing holiday, let’s answer a basic question some of you may have – what is Holi? 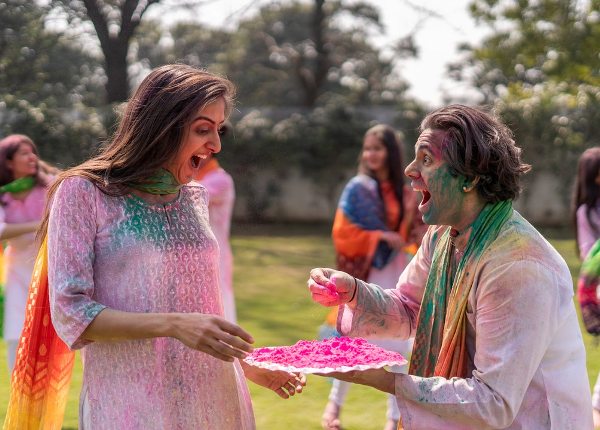 Holi celebrations differ from region to region, but they mostly last two days, starting on the eve of the full moon day of Phalguna, a month of the Hindu calendar which is lunar. This usually coincides with the month of March on the Gregorian calendar, and signals the end of winter and the start of spring.

But that’s not all Holi is about. It is also about the triumph of good over evil, of love over hate, due to which it is also known as the ‘Festival of Spring’ or the ‘Festival of Love’. Of course, that doesn’t take away from the fact that it is still a Festival of colors, where people apply colors on each other in the form of powders or colored water. This kind of color throwing happens mostly in open areas or the outdoors, and is often accompanied by the beating of drums, song and dance.

But how did this festival originate? There are three stories that are considered to be the origin of Holi, and all of them are equally celebrated.

The Story of Holika and Prahlad 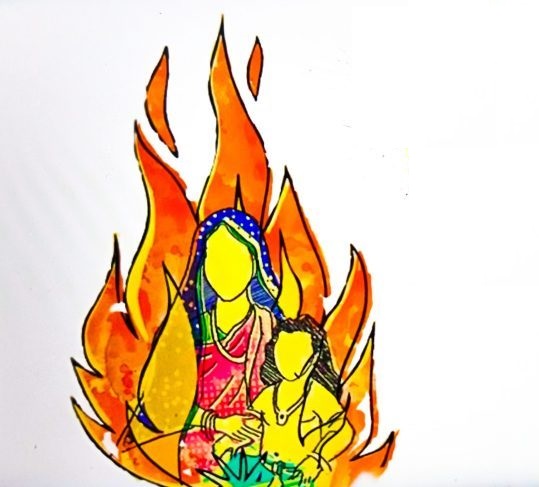 This is the most popular story behind Holi, and starts with an evil king, Hiranyakashipu, who considered himself god and demanded that his subjects worship him. However, his son Prahlad was an ardent devotee of Lord Vishnu and refused to bow down to his father.

The king was so angry that he decided to kill Prahlad. For this, he took the help of his sister Holika, who was immune to fire. Holika managed to get Prahlad to sit on her lap while she sat in a pyre. However, due to her evil intentions, Holika lost her immunity to the fire, and was burnt to ashes while Prahlad remained unharmed. Lord Vishnu then appeared in a man-beast avatar and killed the evil king. This is how the festival gets its name from that of Holika.

The Story of Radha and Krishna 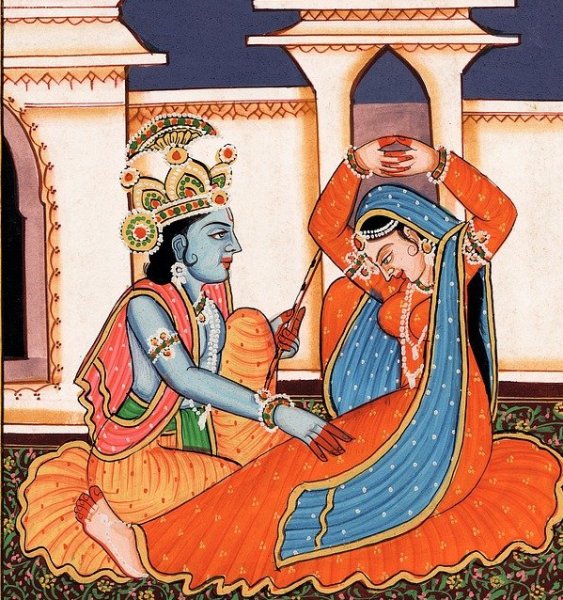 This story is popular in Uttar Pradesh, particularly in Braj, which is where Lord Krishna grew up. When Krishna was a baby, he was assigned a wet nurse, who was actually a she-demon in disguise, named Putana. The poisoned breast milk she fed him gave Krishna his blue color, which stayed with him throughout.

Later, when Krishna was older, he wondered if other people of a normal skin color would ever like him – particularly Radha. He shared his worries with his mother who told him that he could just as well apply some color on Radha’s face too. Radha agreed, and Krishna sealed his love for Radha by applying some blue color on her skin. There are also other stories about Krishna throwing colored water on milkmaids as a prank.

The Story of Shiva and Parvati 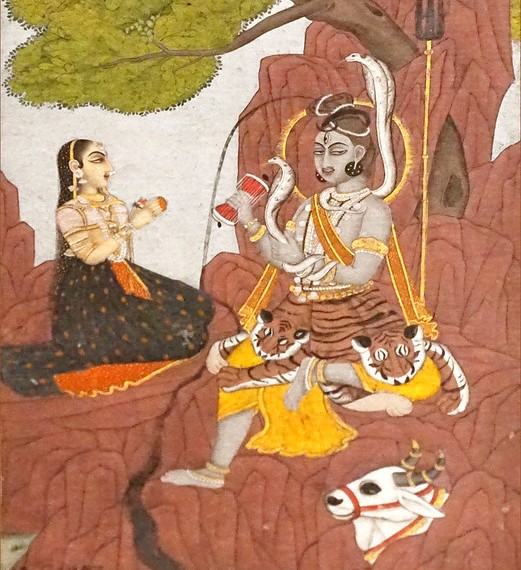 This story is more popular among South Indian states, particularly Tamil Nadu. After his wife Sati’s death, Lord Shiva renounced the world and went into deep meditation. However, this threw the world out of balance, and Sati was reborn as Parvati to bring Shiva back to the world.

However, no matter how much she tried, it wasn’t working. So Parvati asked Kamadeva for help, who was the Indian God of love. Similar to Cupid, Kamadeva shot a love arrow at Lord Shiva. This broke his trance, and he was furious. Lord Shiva opened his third eye, saw Kamadeva and burned him down to ashes.

Later, Shiva realized his mistake and brought Kamadeva back to life – in an invisible form, granting him immortality. It is believed that Holi is the day of Kamadeva’s sacrifice and people in South India offer sandalwood paste to Kamadeva as a relief for his burns.

15 Interesting Facts About the Festival of Colors 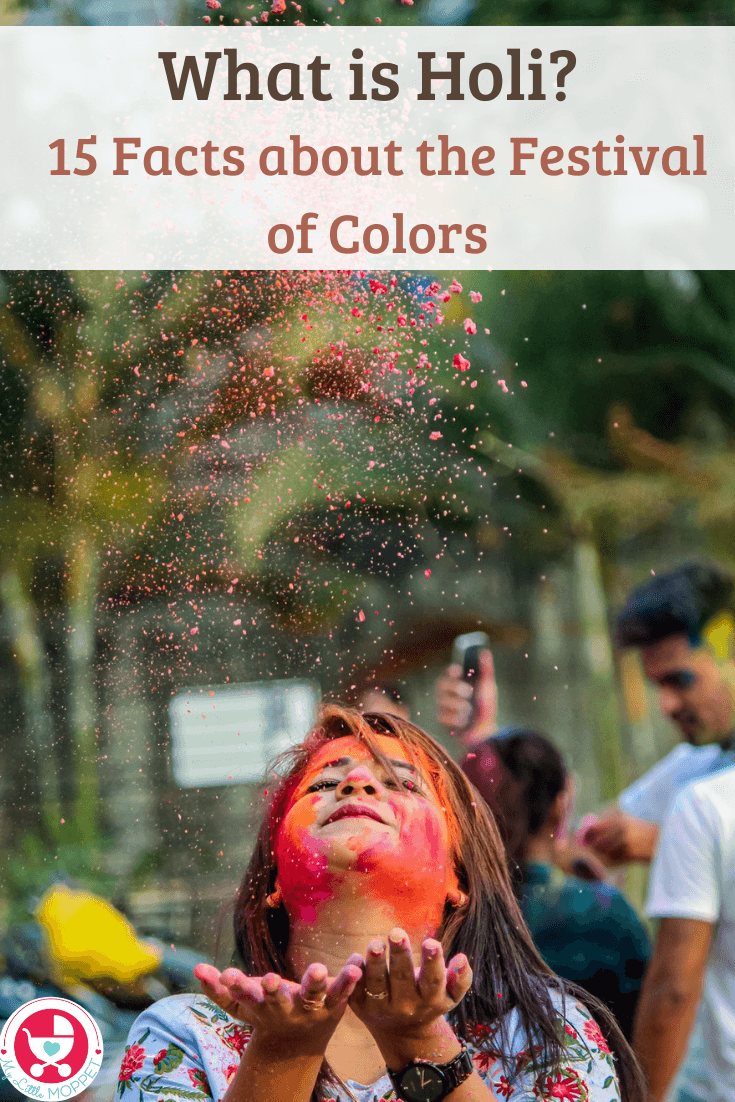 1. Holi begins in the night before the full moon, usually with a bonfire that is reminiscent of the pyre Holika burned in. A week before the festivities, people, often children, wander around collecting things to throw into the bonfire, like  pieces of wood or twigs. A pyre is setup in an outdoor space with an effigy of Holika, made of locally available materials. Since the pandemic began, some people also place effigies that look like the coronavirus in the pyre!

2. After sunset is when the Holi celebrations officially begin, by lighting the pyre and burning everything in it – a ritual called Holika Dahan. A Puja is often done before lighting the pyre, and people sing and dance around the pyre. This fire is believed to burn all evil spirits, cleansing the environment around us. It is also said that the heat from the fire represents the warmer weather coming ahead.

3. The next morning is also called Rangwali Holi, Phagwah or Badi Holi. This is when we get down to the real thing – playing with colors! People do this either by applying small amounts of colored powder on each other, or by throwing colored powder into the air. Each color is believed to have a certain meaning, like red indicating love and green symbolizing prosperity. 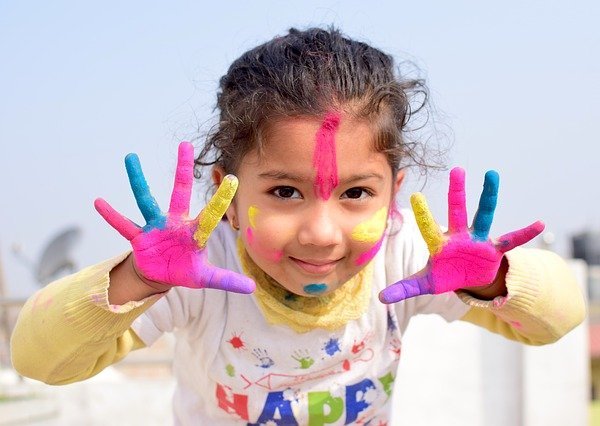 4. Children and young people also play with water balloons and water guns filled with colored water, while older people prefer dry powders. These water guns are called pichkaris and are available in bright colors all over the country. Some kids can get creative by filling the guns with muddy water! All is forgiven during Holi, as the popular saying goes: “Bura na mano, Holi hai!” which translates to, “Don’t feel bad, after all – it’s Holi!”

5. There have been concerns about using chemical colors, which has led to people going back to traditional ways of using natural colors. In fact, there are many organizations like Delhi’s Development Alternatives, Pune’s Kalpavriksh Environment Action Group and the Society for Child Development who are running their own campaigns for teaching kids to make their own DIY Holi colors from natural ingredients like indigo, flowers and vegetables.

6. Once the colorful revelry is done with, people clean themselves up, dress in fresh clothes and visit friends and family. It’s now time for lots of sweets and other delicacies. The most popular dish during Holi is Gujiya, a fried dumpling filled with a sweet stuffing made of dried fruits and nuts. Other popular Holi dishes are pani puri, chole bhature, chaats and namkeens. 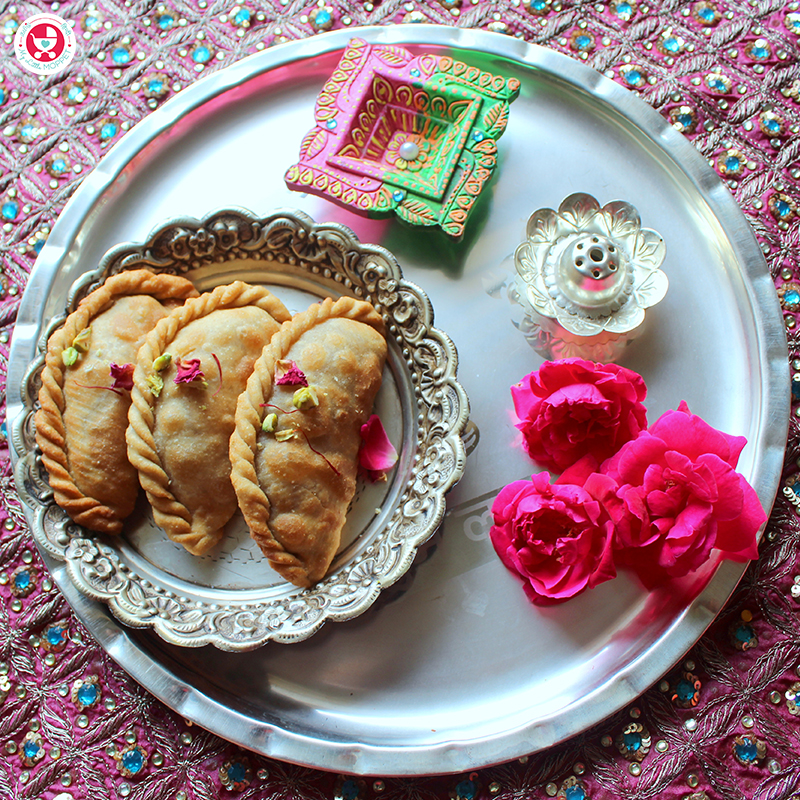 7. One drink most people serve their guests during Holi is thandai, a drink that contains many spices. In several regions, the thandai is often laced with bhang, which is another word for cannabis or marijuana. This is of course, only consumed by adults, and is believed to have some medicinal benefits. The preparation of Bhang is a ritualistic process in places like Mathura, where prayers are recited before starting.

8. In many places of India, Holi is accompanied by special songs and dance performances. In West Bengal, Holi is known as Dol Jatra which includes lots of singing and dancing. In Uttarakhand, Holi is celebrated as Kumaoni Holi that celebrates the regions own unique music and culture.

9. In South India, the story of Shiva, Parvati and Kamadeva is the most popular one, and as a result, Kamadeva, the God of love, is worshipped on this day. Holi is also known as Panguni Uthiram, and here the festival is also a celebration of love, marriage and bonding. In fact, even the wife of Kamadeva, Rathi, is worshipped. Temples across Tamil Nadu celebrate divine marriages like those of Shiva and Parvati, Murugan and Deivanai or Kodhai Aandaal and Rangamannar. 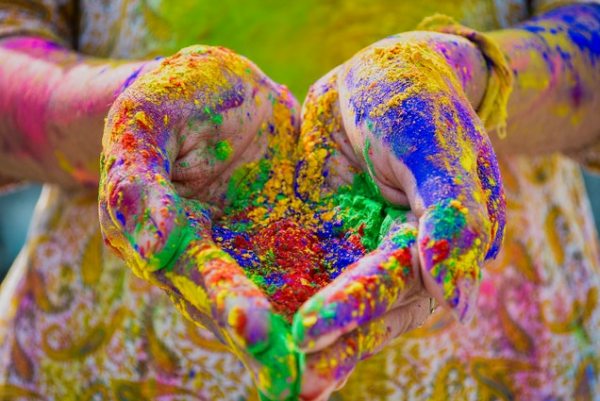 10. The fun part about India is that since it is so large and diverse, there are many different rituals associated with the same festival. In some places in Gujarat, women roll up their sarees into a thick rope and use it to pretend to smack their brother-in-law while also covering him in colors! The brother-in-law returns the favor by bringing her some special sweet meats later in the day.

11. Another interesting Holi tradition is from Barsana in Uttar Pradesh. Here, the women of the town carry sticks and run behind the men to beat them. The men, on the other hand, try to escape the beatings with shields. The tradition is called Lath Mar Holi, which literally translates into ‘Stick-beating Holi’!

12. Vrindavan is the land of Lord Krishna, so Holi is a major festival for the people in this region as well as in Kanpur, where Holi lasts for seven days. The last day sees a grand fair called the Ganga Mela, which was started by early Indian freedom fighters in 1857 under Nana Saheb. 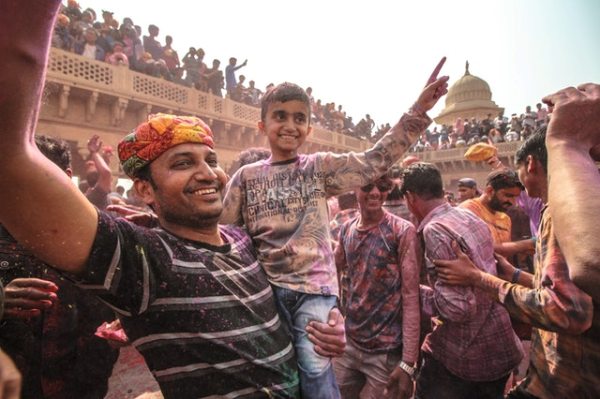 13. Holi has an important place in history too. The Mughals enjoyed Holi so much that even the Emperor wasn’t considered off bounds when it came to throwing color! Grand Holi celebrations were held, and they were known as Eid-e-gulaabi or Aab-e-Pashi. There are many poems and songs about Holi written by historians and royals like Bahadur Shah Zafar and Amir Khusrau.

14. Holi is also celebrated with great enthusiasm by Sikhs, for many generation. It is referred to as Hola by Sikhs, and is usually a three day celebration that includes displays of expertise in horse-riding, archery and other athletic exercises.

15. It is said that Maharaja Ranjit Singh celebrated Holi with great fervor – there are reports that 300 mounds of colors were used by the Maharaja and other royals in 1837 at the Holi celebration at Lahore! Even officers of the British Indian Army joined in the revelry that was hosted by the king. 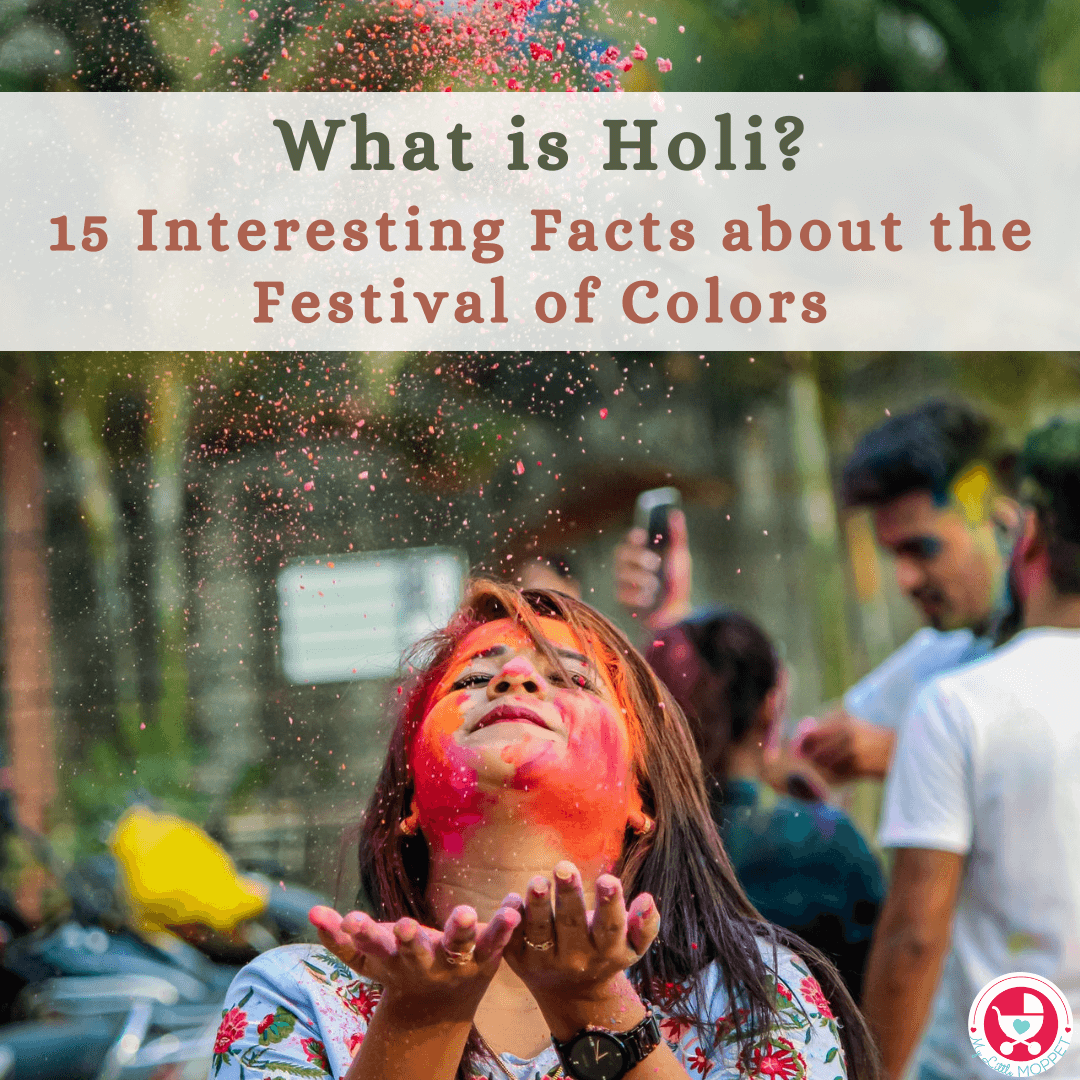 Although we think of Holi as a ‘fun’ festival involving the tossing of colors everywhere, the real spirit of the festival runs deep. The basic principle of this celebration is that everyone is equal – by the end of a few rounds of playing with colors, everyone looks the same, whatever your soci0-economic status, whatever your age, whatever your skin color.

That’s why Holi is considered a great ‘leveler’ – it brings everyone to the same level. It is also an opportunity to bury old hurts and forgive old wrongs. People use this festival to repair fragmented relationships, pardon debts and let go of grudges. Just like spring is a time for renewal, Holi is a time for cleansing the heart and soul of all negative emotions.

The universal appeal of this festival also show that this is a holiday that is for all communities, religions and regions. Everyone gets together to exchange colors, and in a society that’s getting increasingly divisive, Holi is a breath of fresh air – and lots of color!