Earlier, whenever I heard the phrase ‘sleep like a baby’, an image of a cherubic baby used to pop into my mind. A little baby, dressed in a sleep suit, covered with a blanket and sleeping peacefully as if angels were watching over him. That is, till I became a Mom.

Jump To hide
Get your Baby to Sleep and Grow with #NextGenPampers!
Buy Healthy Nutritious Baby, Toddler food made by our own Doctor Mom !

After becoming parents, we realized that our naïve idea of babies sleeping peacefully through the night was nothing but a myth, and we had no idea how much the Kiddo would wake during the night!

I began to wonder if it was normal for babies to wake so often. Some detailed research led to some interesting facts. Newborns sleep only for two to three hours at a stretch, especially since their little tummies need frequent refilling. However, by 4-6 months, most babies can sleep for at least 6 hours at a stretch, which is good enough for me to call it a night!

Yet, if your baby is frequently waking, it’s time to consider the reasons. Here are the most common ones:

The Importance of Baby Sleep 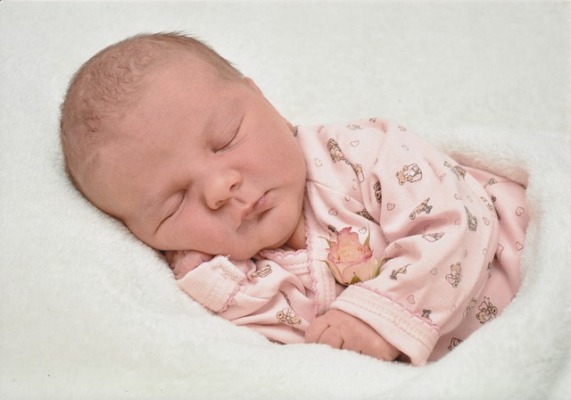 We’ve all heard that most of a child’s brain development occurs in the first three years, especially the first year. But did you know that a good part of this development occurs during sleep? When children get solid hours of undisturbed sleep, they wake up fresh, active and ready to learn and grow. However, children with disrupted sleep are more vulnerable to behavioral disorders and poor cognitive development.

This put things in a new perspective for me. As I assessed the reasons my little one was waking so much, I realized that I was changing his diaper three, sometimes four, times a night. So there’s my reason!

Since my baby’s current diaper was obviously not doing its job well enough, it was time to switch – to something newer and better – something next generation! And soon enough, I got my hands on a pack of #NextGenPampers, the brand new Pampers Pants, with extra absorbing channels.

Get your Baby to Sleep and Grow with #NextGenPampers! 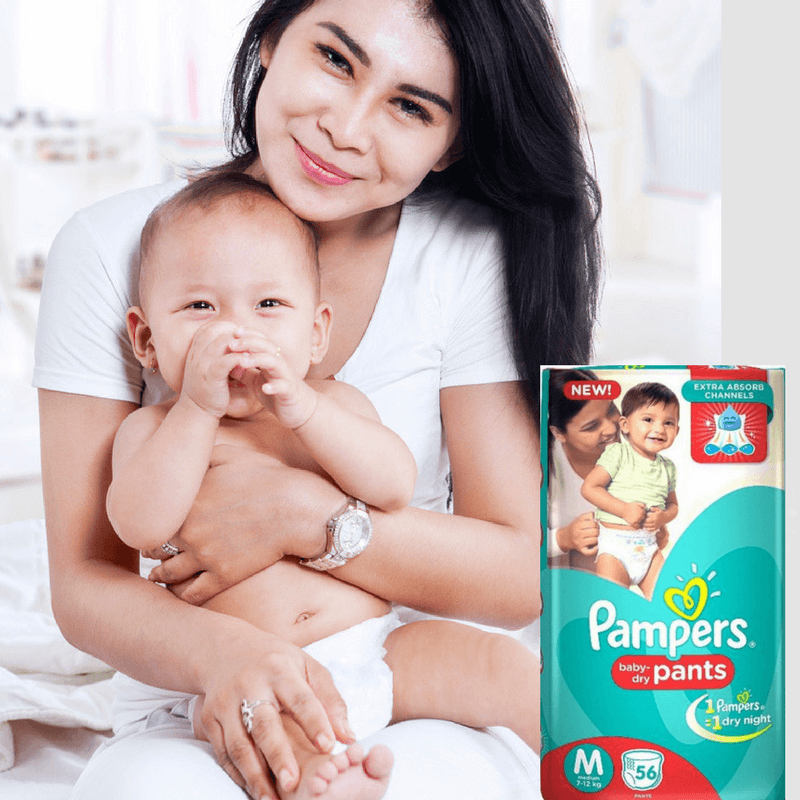 In our houses, Dad’s usually comes home in the late evening, when our little bundle of joy has finished his dinner and ready for bedtime. Exactly at my home too! That’s why our arrangement is that the bedtime routine will be handled by Dad – bath, diaper, pajamas and story. I try to make life easier for everyone by setting everything they need beforehand. And today, there was going to be something new – Pampers Baby Dry Pants! 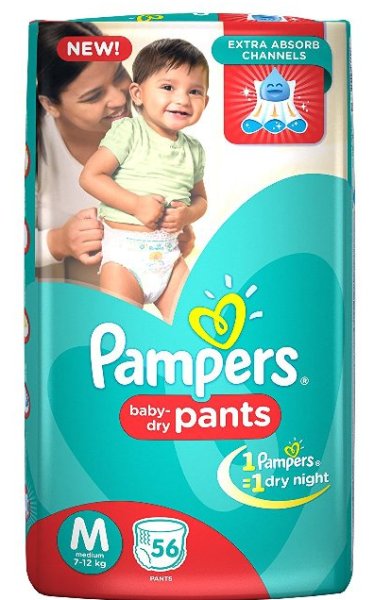 Our Experience with the Pampers Baby Dry Pants 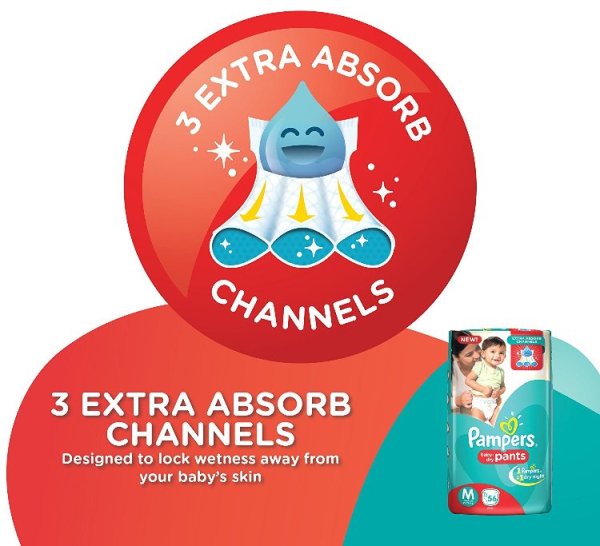 We got our Pampers Baby Dry Pants in a pack of 56, in Pampers’ traditional colors of teal-turquoise and bright pink. There was a certain ‘pop’ factor to the packaging with even the extra absorb channels being shown with a smiley face!

Many people I’ve spoken to have the impression that pant style diapers are meant for older kids – kids who are old enough for underwear or training pants. I thought that was the case too, till I found that Pampers Pants were available in smaller sizes too! We got one in Medium, which was perfect for our 4 month old. 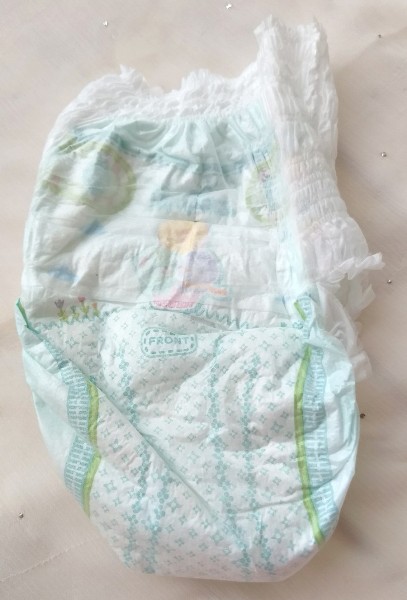 When I got the pack, I was a little surprised that it was a pack of 56 – it looked more compact than expected. Opening the pack revealed why – the diapers are super thin! This is not the kind of thick, bulky diaper we’re used to seeing, which is quite a pleasant surprise! 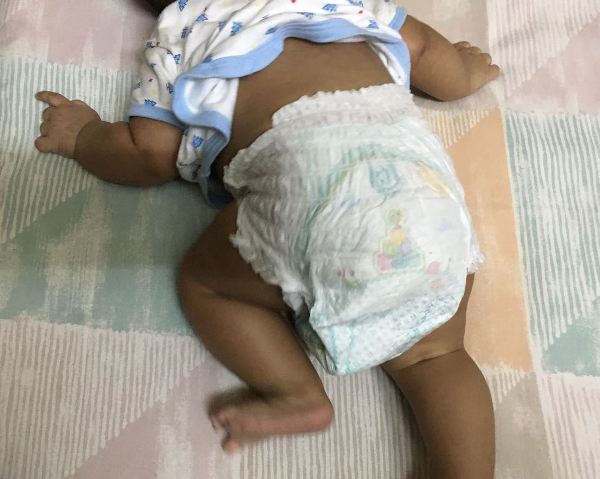 Time for the kiddo to try his new diaper with Dad! There are people who treat diaper-changing as if it were more complicated that sending a rocket into outer space. Thankfully, even they can breathe a sigh of relief with the Pampers Baby Dry pants. It’s soft and really easy to put on – even if your bundle of mischief is busy kicking or air-cycling. There’s even a label that marks which one’s the front! I think it’s perfect for first time Dads to get more involved with their little ones and approach diapering with a more relaxed mindset.

The diaper fit perfectly, with the flexible waistband snug but comfortable around the waist. The diaper has quite a bit of coverage, and most of it is made of absorbent material. The cuffs around the thighs also fit right, ensuring that the diaper isn’t loose, without digging into baby’s delicate skin. 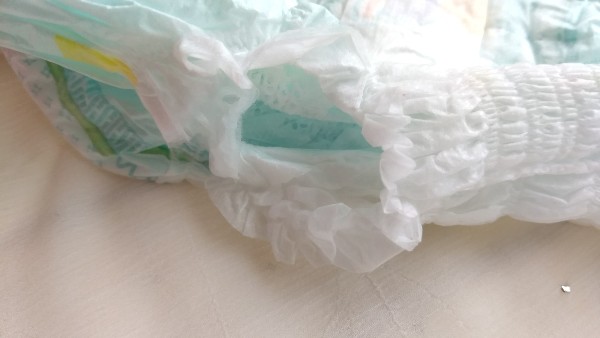 So after our munchkin was all diapered and dressed, Dad read him Goodnight Moon for the umpteenth time. After one more feed, he was asleep. I had my changing basket on standby, just in case he needed a diaper change in the middle of the night. But apparently, that was unnecessary!

He slept straight till 5:30 AM. – if you knew my son, you’d know that this was a record for us! I woke up to the sound of him fussing, and was worried he was lying soaked in pee. But there he was, gnawing on his fists and obviously hungry, but obviously dry as well!

Well, well, well, looks like #NextGenPampers really does its job! The diaper was a little heavier than when it was put on, but it didn’t have that soaked and dragging appearance. My son’s sleep suit and sheets were perfectly dry – there was absolutely no leakage from the sides or the top, all thanks to the magic gel in the diaper.

One of the best things I observed was that there was no bunching, as is common in most diapers after a good pee. Because there are three separate absorb channels, the wetness gets ‘divided’ uniformly, and prevents that horrid bunching and chafing. Thanks to the baby lotion within the diaper, my baby’s skin was also soft and fresh, just like how he looked after a good night’s sleep!

So should you buy the #NextGenPampers Baby Dry Pants for your baby? Let me first ask you this – do you want your little one to have a full night’s rest and healthy, rash-free skin? Then go for it! As any parent knows, nothing gives a mom more joy than seeing her baby healthy and happy. Since diapers are such an important part of these early stages, you want to make sure that you’re choosing what will keep your baby happy, dry and free to play and grow. I know what my baby is going to wear from now on, what about you? 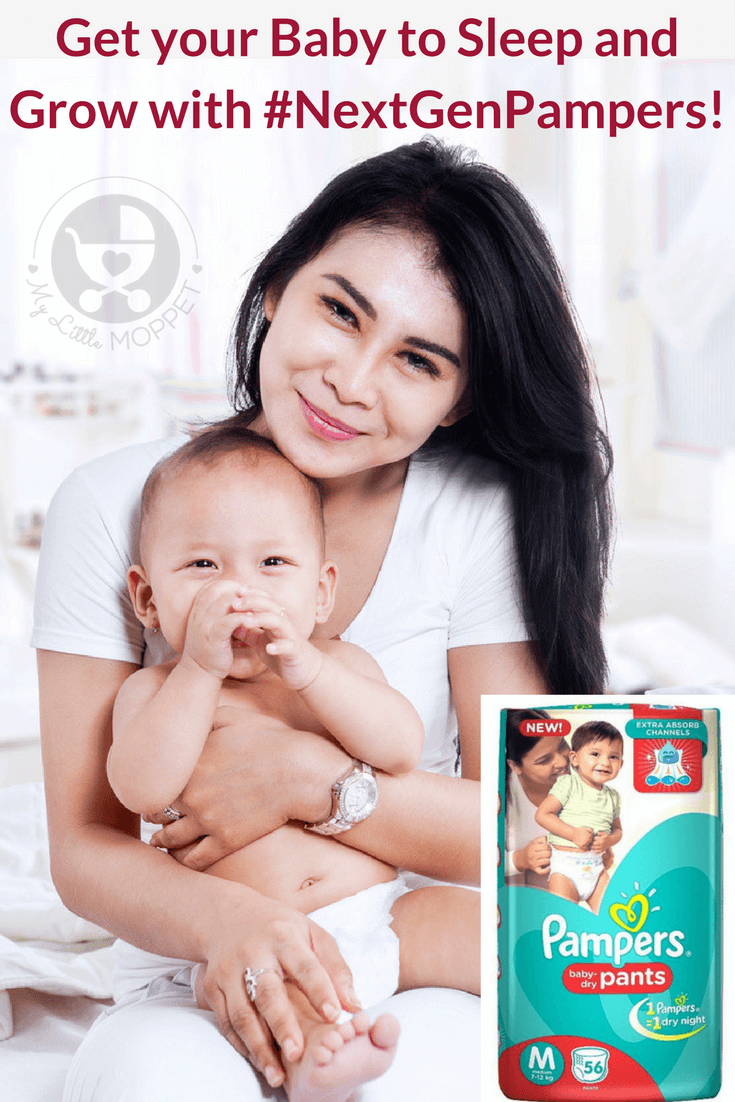