Let’s take our kids back to our roots with these tips for a traditional Sankranti Celebration, including various festive rituals and customs!

Jump To hide
15 Tips for a Traditional Sankranti with Kids
Buy Healthy Nutritious Baby, Toddler food made by our own Doctor Mom !

“The sun does not shine for a few trees and flowers, but for the wide world’s joy.”

Have you ever experienced sunshine on a cold winter’s day? Isn’t that simply a magical feeling? That’s the kind of renewal that Makar Sankranti brings forth, after months of cold weather!

When you look closer, Makar Sankranti is a festival with many associations. For one, it marks the transition of the Sun into Capricorn. This makes it an occasion for people to honor the Sun God with the appropriate rituals. Makar Sankranti is also celebrated as a harvest festival, and in the parts of India where winters are severe, it’s an occasion that heralds the arrival of spring.

So now you know why this festival is such a big deal all over India! 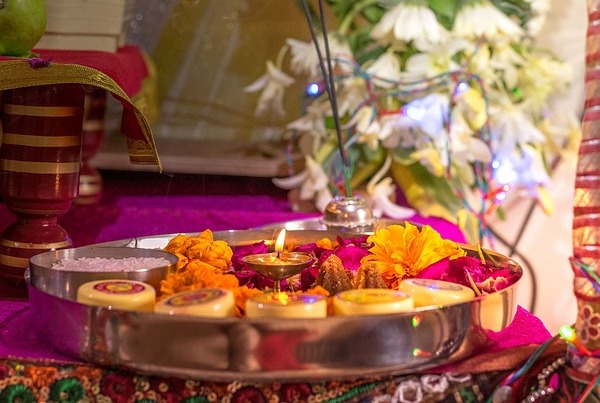 Makar Sankranti is also the only Indian festival based on the solar calendar, which is why the date remains the same according to the Gregorian calendar every year – usually the 14th or 15th of January. Makar Sankranti is known by different names in different parts of India, some of which are:

While some celebrations like prayers and yummy food are common across Indian celebrations, Makar Sankranti has some unique features of it’s own. The largest gathering for this festival is held by the Hooghly River, on Sager Island in West Bengal. This festival is also synonymous with kite flying, as the skies are filled with bright, colorful kites!

As with many other things, the spirit of Sankranti risks being lost as smart phones and gadgets take over our lives. As parents, we can prevent this lovely festival from turning into just another holiday on the calendar; instead, let’s use this opportunity to re-introduce our kids to our roots, by celebrating a traditional Sankranti with the whole family!

15 Tips for a Traditional Sankranti with Kids 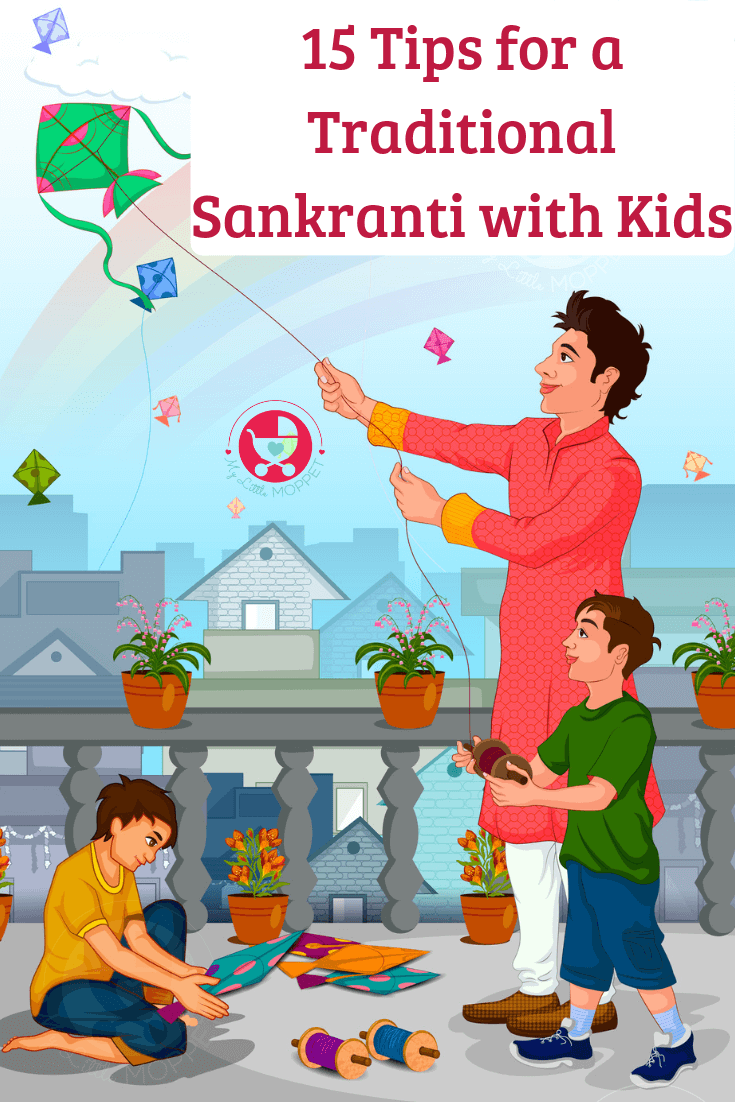 1. If you haven’t done a New Year clean up of your home, now’s the time to do it!! Get everyone involved in decluttering all rooms, getting rid of damaged or unused things. In parts of Andhra Pradesh and Telengana, there is a custom of clearing houses out of all trash, dumping it in a pile and lighting a bonfire. Even if you don’t want to burn everything, you can still declutter and find ways to reuse, donate or recycle.

2. Get the entire family in the spirit of the festival by decking up your home. Decorations for Sankranti are generally not as lavish as those for Diwali, so simplicity is the way to go. Get the kids to hang a few torans of fresh leaves or place a few fresh blooms around the house. And don’t forget to draw a pretty Rangoli with organic colors! 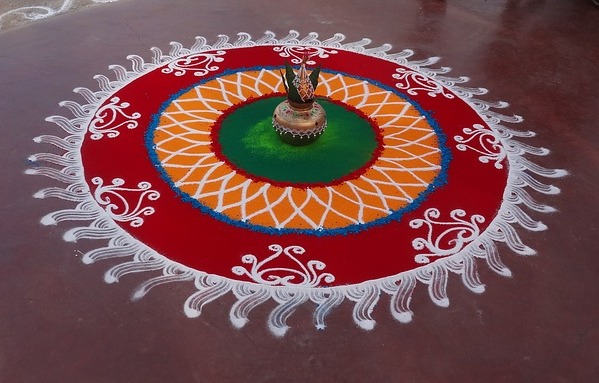 3. Make sure the kids go to bed early, so they can wake up early enough, depending upon their age. Let them experience that blissful feeling of being up with the sun and how good it feels to not rush through anything.

4. If it’s not too cold, the kids can have a quick shower to feel completely refreshed. On Makar Sankranti, many states have a ritual of a bath first thing in the morning, which is traditionally a dip in a river or lake. The Ganga sees a huge influx of people for this purpose on Sankranti. During this time, water is also offered to the Sun God as part of prayer.

5. Baths are often followed by prayers, although some may begin earlier, as mentioned above. Since Pongal is a harvest festival, the focus is on rice and farm animals. On the first day, rice is boiled in milk and offered to the Rain God. On the second day, the same is offered to the Sun God. On the third day, cattle are bathed and dressed up in bells and flowers. The essence seems to be one of gratitude, for the sun and the rain and everything else, so let the kids pray and say thanks for all they have. 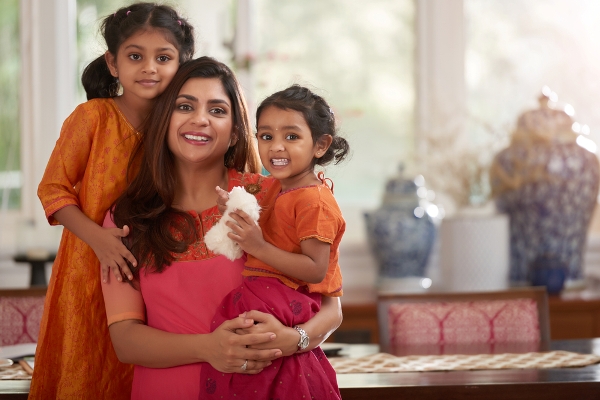 6. Of course, if it’s a festival, there have to be new clothes!! Have a set of ethnic outfits ready for your kids – the little ones will look adorable! You can get lehenga sets or suit sets for the girls, and dhoti kurta sets for boys. Click pictures as soon as they are dressed – you don’t know how they’ll look after a couple of hours of rough play!

7. Looks like something’s missing. Yes, the food! Makar Sankranti has some specific recipes, most of which contain ingredients that are believed to improve one’s health during this season. Sesame, groundnuts and jaggery seem to be the most popular ingredients for Sankranti. Sesame laddus in Maharashtra, gajak and ghevar in Rajasthan, Chikki in Gujarat and pinni in Punjab are some of the popular sweets. 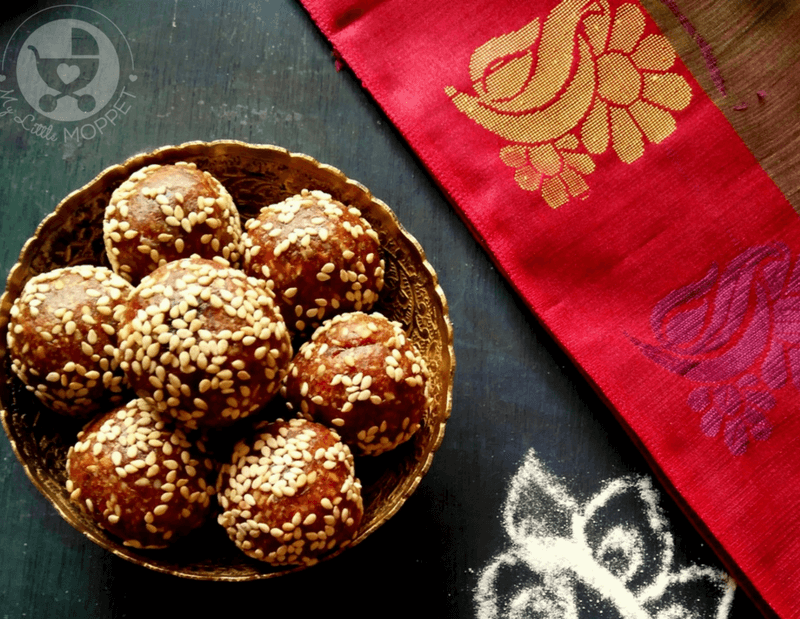 8. But this doesn’t mean that savory foods don’t feature during Sankranti! The focus is on seasonal vegetables, as in dishes like undhiyo, or simple, easily digestible foods like pongal and khichdi. North Indian khichdis are quite popular during Sankranti, and often feature peas, cauliflower and potatoes. As you can see, the dishes are common kiddie favorites!

9. Another important part of Sankranti celebrations is charity. Many families make sesame and jaggery laddus or khichdi in bulk and offer them to those in need. In some places large gatherings are organized and meals are prepared for underprivileged families so everyone can enjoy the festival equally. Get the kids involved in such community gatherings – it is very important they learn to give and share, especially in this day and age.

10. Makar Sankranti is also a time for renewing old ties and making new ones! Take the kids and visit relatives you haven’t seen in a while, and tell your children exactly how they’re related to you. Visit old friends too, and don’t forget to take along some of those delicious laddus! 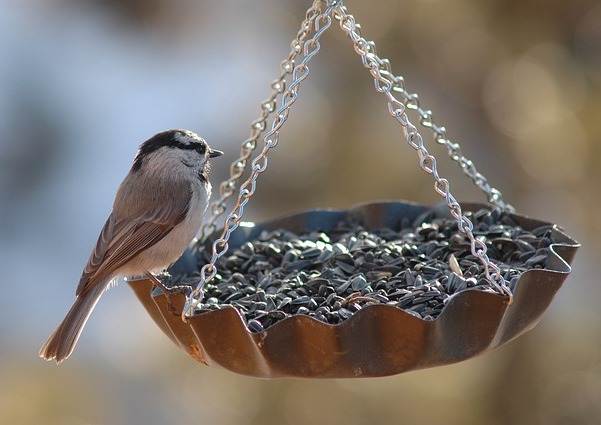 11. When we speak of charity, it isn’t just for humans. Since Sankranti is around the time the weather starts getting warmer, several migratory birds start returning to their homes. Welcome them back by getting the kids to make their own bird feeders and hang them out in your gardens. Let the birds have a feast on this special day too!

12. Can you imagine Sankranti without kites? We sure can’t! While kite flying during Sankranti is a big deal in Gujarat and Rajasthan, it’s become quite popular in the rest of the country too. Be careful while flying kites with the kids – use kites made of natural materials and cotton string. Always fly in a safe open place and away from trees or power lines. Never leave kids to fly kites unassisted. 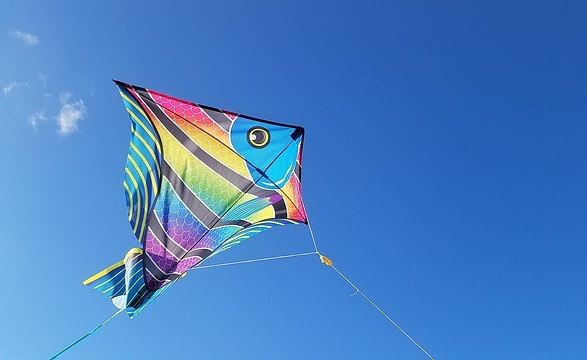 13. Along with kites, paper lanterns are also popular during Makar Sankranti, especially as it gets dark. Again, supervise the kids at all times while handing the lanterns and never leave them alone with it. The sight of lit lanterns floating through the sky is a gorgeous sight that the kids will never forget!

14. Bonfires are the highlight of Sankranti celebrations in the northern states of India, and may be lit on the eve of Sankranti. All the friends and neighbors gather together around the bonfire, tossing in rice and sugarcane. It’s a way to ‘burn away’ all the things that bring us down. The kids can get excited here, so take adequate precautions for fire safety. Keep little ones away altogether.

15. End the day on a perfect note with lots of traditional songs and dancing! Get the kids to join in, and let everyone have a blast. Usually, traditional dances like Bhangra are common, and they offer the right kind of enthusiasm for the perfect end to a special day! 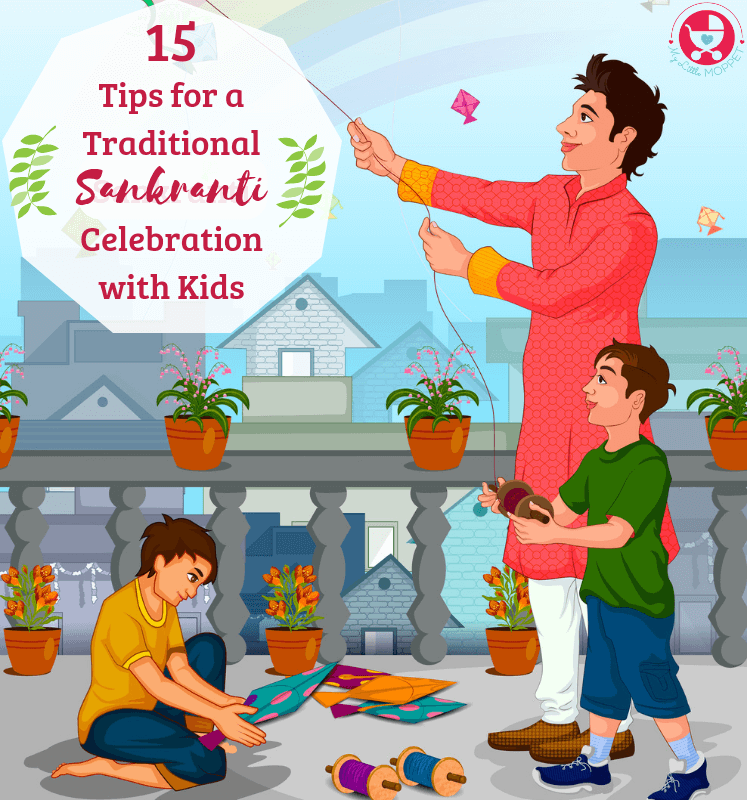